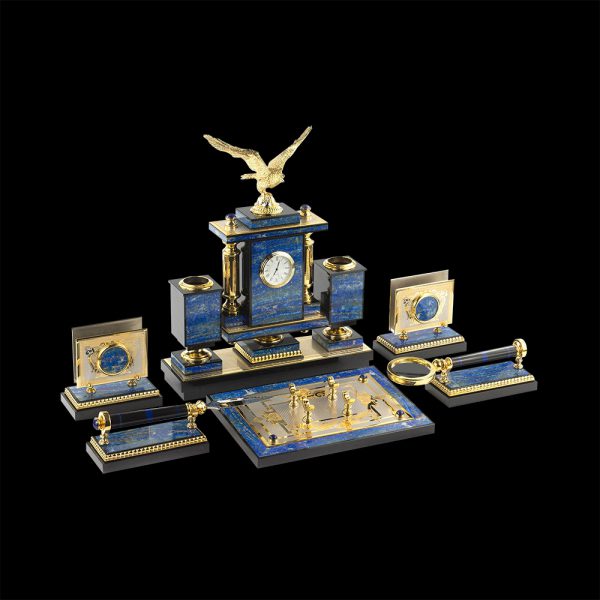 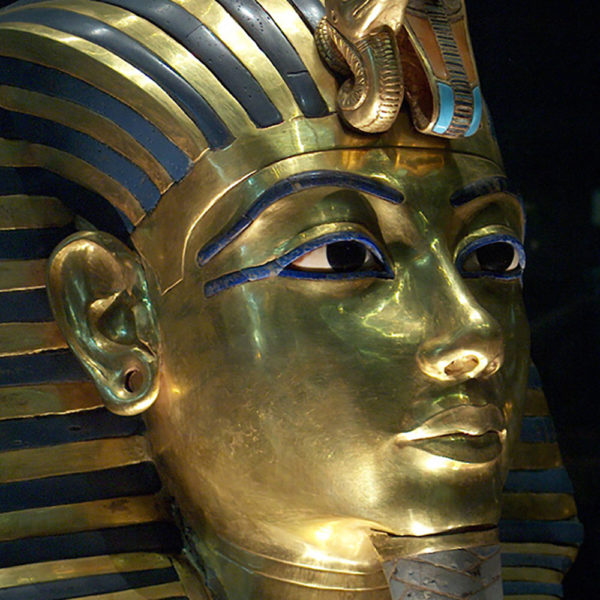 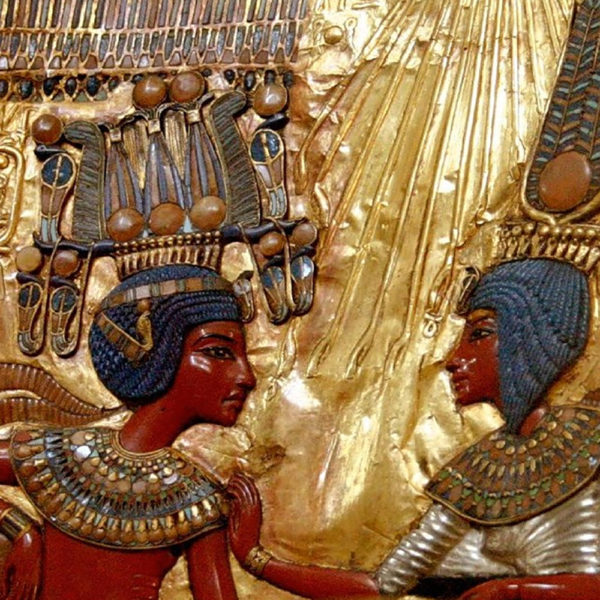 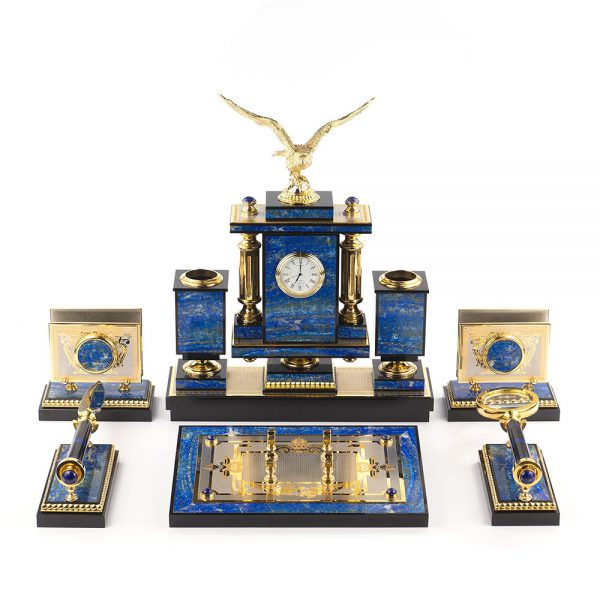 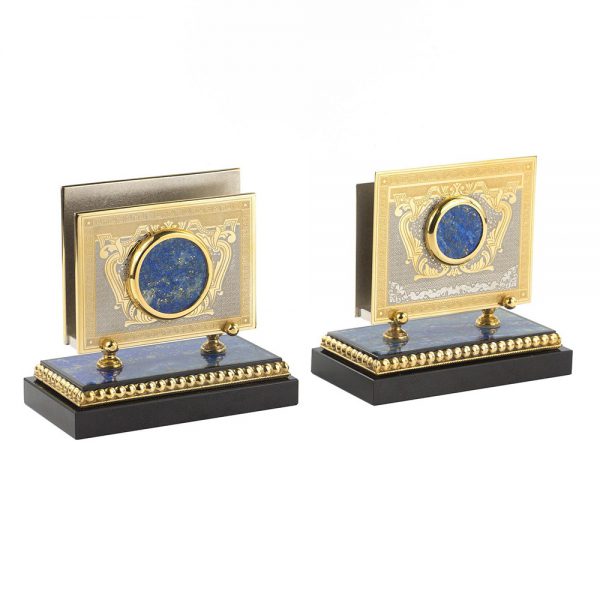 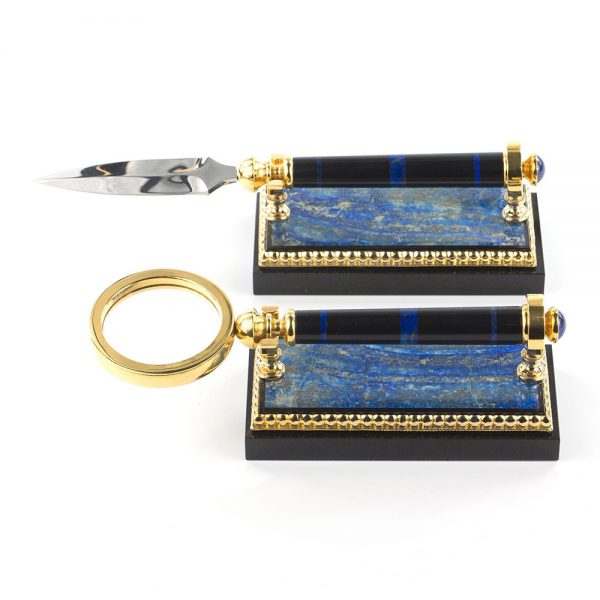 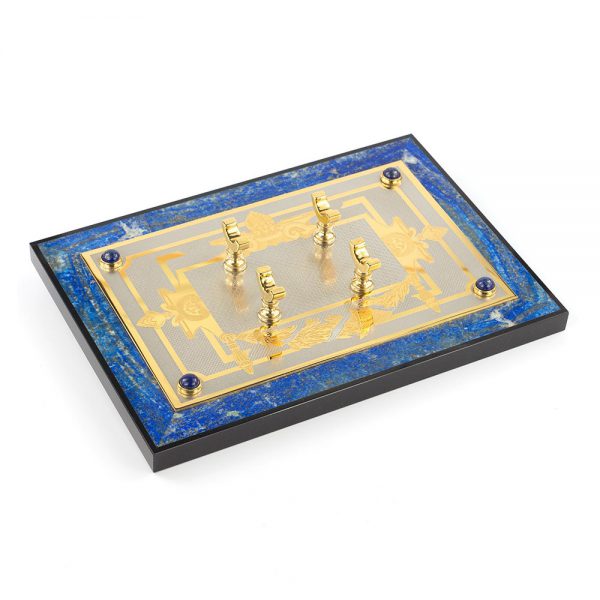 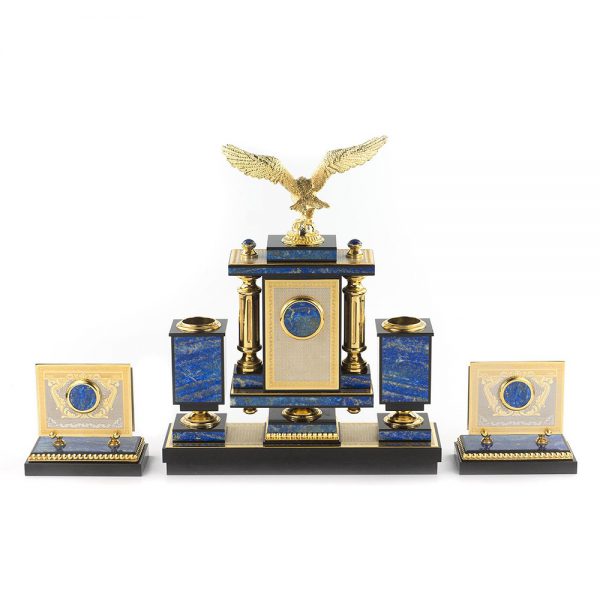 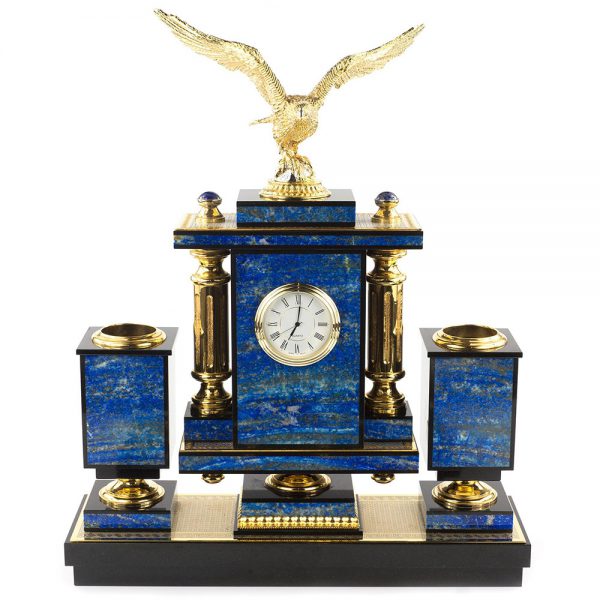 Writing sets decorate your workspace, making it convenient and enjoyable. Exclusive handmade writing sets of stone belong to elite gifts that will become a worthy decoration of a business person’s office.

The cases of the set are decorated by a stone-cutting master with natural lazurite. One of the brightest stones in mineralogy. Lazurite is often called the “heavenly stone” because it is fabulously beautiful and resembles the azure of a sunny clear sky. The name of the stone is translated as the “blue” (from Arabic “azul”). In Persian, lazurite means “blue”. In the Ancient East, it was called “Bukhara lazurite”, “Armenian stone”. A mineral of bright cornflower blue color has a stunning natural shade that shines both in sunlight and in artificial light.

Lazurite items in the Lower and Upper Egypt were widespread in the Gerzeh period (about 3,500 BC) until the period of the Ancient Kingdom (about 2,700 BC). Then was a break, and further – during the Middle Kingdom (around 2,000-1,700 BC). The tomb of the pharaoh Tutankhamun (mid II millennium BC) contained a lot of lazurite items: gold mask inlaid with lazurite, sarcophagus, gold breast ornaments of the mummy, etc.

In addition to the “heavenly stone” at the top of the set, there is a sculpture of a flying golden eagle. It is a symbol of courage and strength. By the way, the emblem of Egypt is the golden emblem of the eagle with the inscription in Arabic “Arab Republic of Egypt.”

A handmade writing set of stone is made by a master from Zlatoust. For more than two hundred years, they have been making decor items, dishes, and original edged weapons for presidents, kings, representatives of the army and navy. They are official suppliers of the residence of the President of Russia and the Moscow Kremlin. The presidential foot and horse regiment in Moscow is still armed with sabers made by our craftsmen 150 years ago.

The set includes:
A big base for two pens,
A magnifier and office knife,
Two business card holders,
A central element with an eagle has a clockwork and two pencil holders.