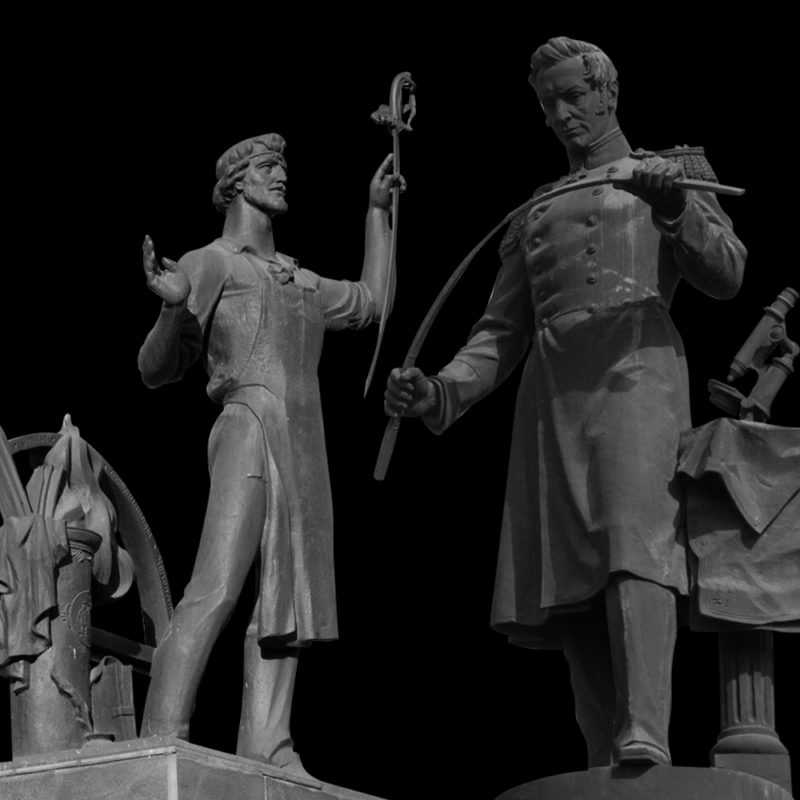 History of the Zlatoust Cold Steel

Weapons have the same long history as humanity itself. For sure, it have always been an integral part of a man’s life for many centuries. It acted as a symbol of power and weaponry of a hunter or warrior, a respected shrine, decoration or award… The long and proud history of cold steel has so many variations that no collector will be able to collect all its variations.

The tradition of presenting weapons to a respected man is one of the most ancient and respected in all cultures.

In modern reality, it is customary to present souvenir weapons. Souvenir weapons are distinguished by bright artistic imagery and a complex, sometimes unique, technique of making. As a rule, such weapons are devoid of applied function. They are original and vibrant works of art made in a most complex manner. These sharpened favourites can melt the ice of indifference of any person, therefore souvenir weapons are original exclusive gifts, extraordinary business souvenirs and a present for a man, a symbol of his bravery and courage.

After the war of the Russian Empire with Napoleon in 1812, the decree of Emperor Alexander I founded the first state cold steel factory. In 1815, it was opened. Alexander von Eversman was appointed the first director of the factory.

To establish production, more than a hundred experts were invited from renowned arms centers in Europe, including Solingen and Klingenthal (Germany).

In summer 1816, the first batch of Zlatoust blades was sent to Saint-Petersburg, both combat weapons and decorated samples.

In a short time, Zlatoust masters turned from students into great masters, surpassing their German teachers with new work techniques, an artistic approach and unsurpassed quality. Later, Alexander von Eversman himself admitted that in his homeland, Germany, they could not surpass the Russian masters.

By the highest decree of the Emperor dated March 7, 1817, it was stated that the Zlatoust factory “should produce weapons instead of other weapons factories.” 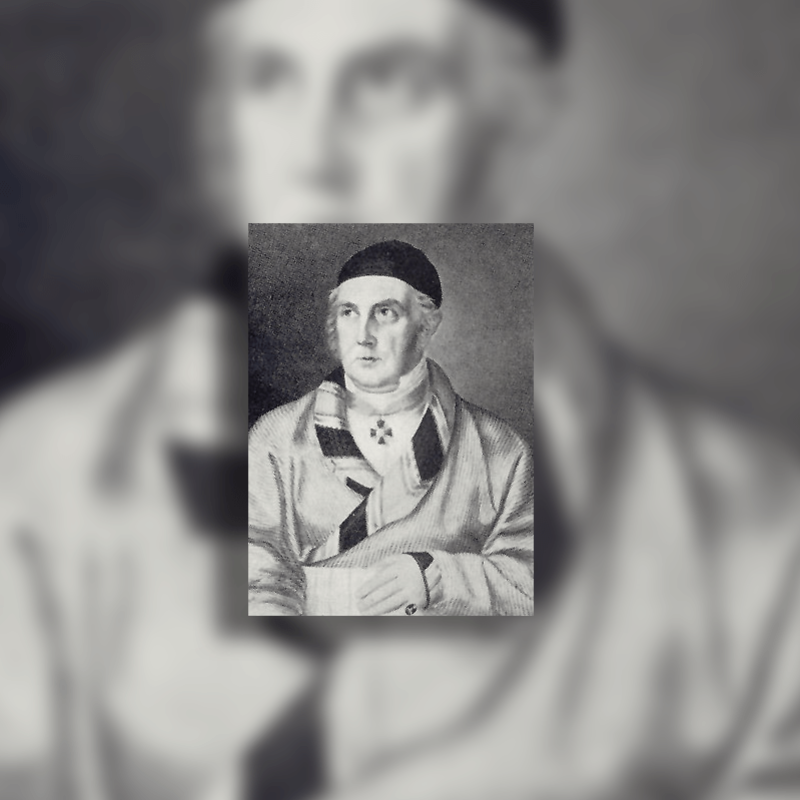 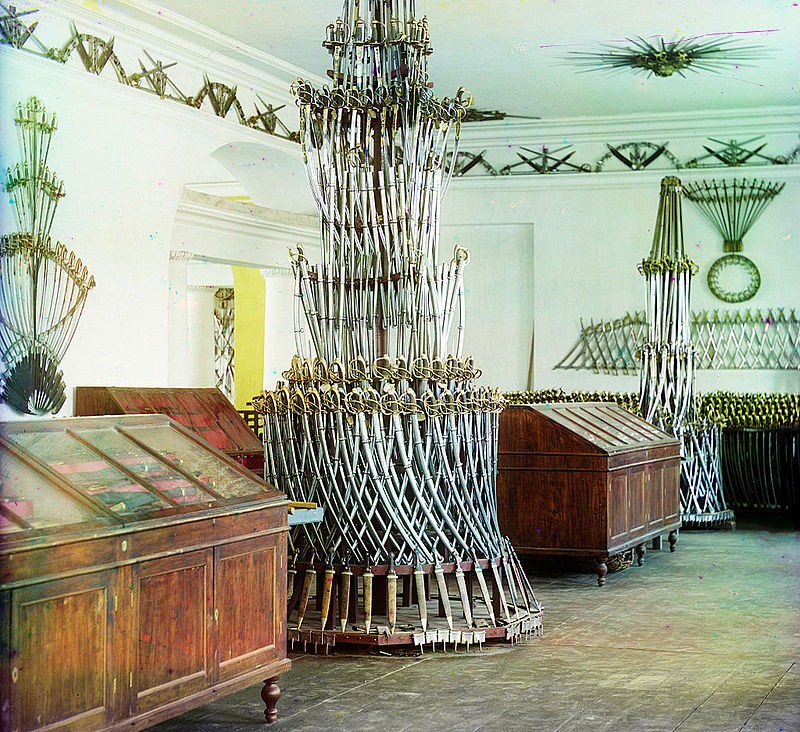 Photograph of 1909. A hill of weapons at the Arsenal Museum of the Zlatoust plant participating in an international exhibition in Europe.

The history of metal engraving lasts for more than one millennium and involves a substantial number of treatment methods. In Zlatoust, the beginning of the engraving industry was, indeed, laid by the weapon makers from Solingen (Germany), they passed on the secrets of their craftsmanship, including gilding through fire. But in the tradition of foreign masters, the decoration of blades was limited to a few symbolic patterns. There was no uniform composition, and almost no embossed relief gilding.

We owe the emergence of the original art of the Zlatoust engraving to the Russian masters Ivan Bushuev and Ivan Boyarshinov. The talent of these engravers is rooted in the Stroganovs’ icon painting school.

Bushuyev’s works were presented to the emperor himself, and until now they are a magnificent work of weapon-making art.

Discovery of the New Steel

After graduating from the Saint-Petersburg mountain corps, the great metallurgist Pavel Petrovich Anosov worked at the Zlatoust weapons factory. The Major General of the Corps of Mining Engineers headed the weapons factory for many years. Anosov made hundreds of experimental melts, made a number of discoveries and made bulat steel.

Bulat steel is a classic example of the victory of science. There is no inventor of bulat and never was. No one can ever tell the date of its discovery.

The greatest successes were achieved by the ancient metallurgists of India, Persia and Syria. The Greeks wrote that bulat blades existed in India already in the 1st century BC. However, historians rightly do not refer the work of ancient craftsmen to certain countries, preferring to single out certain localities, sometimes even villages and cities famous for hereditary craftsmen.

Is the secret of the ancient masters impossible to unravel? Pavel Petrovich Anosov, a person who went down in the history of science as an outstanding metallurgist, who won the “correspondence” competition with the masters of the Ancient East, the creator of Russian bulat steel, also asked himself this question. 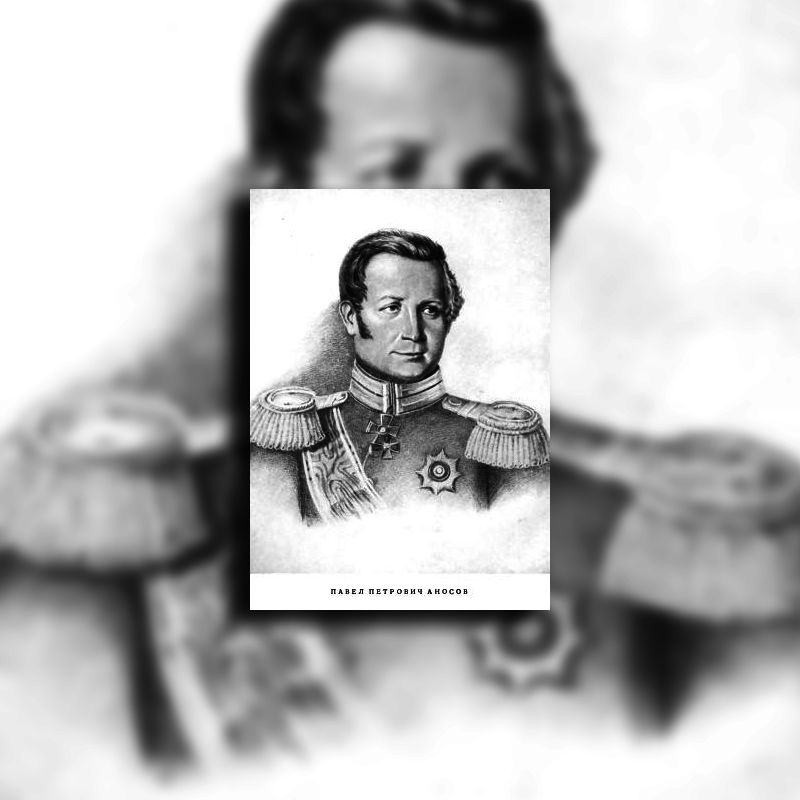 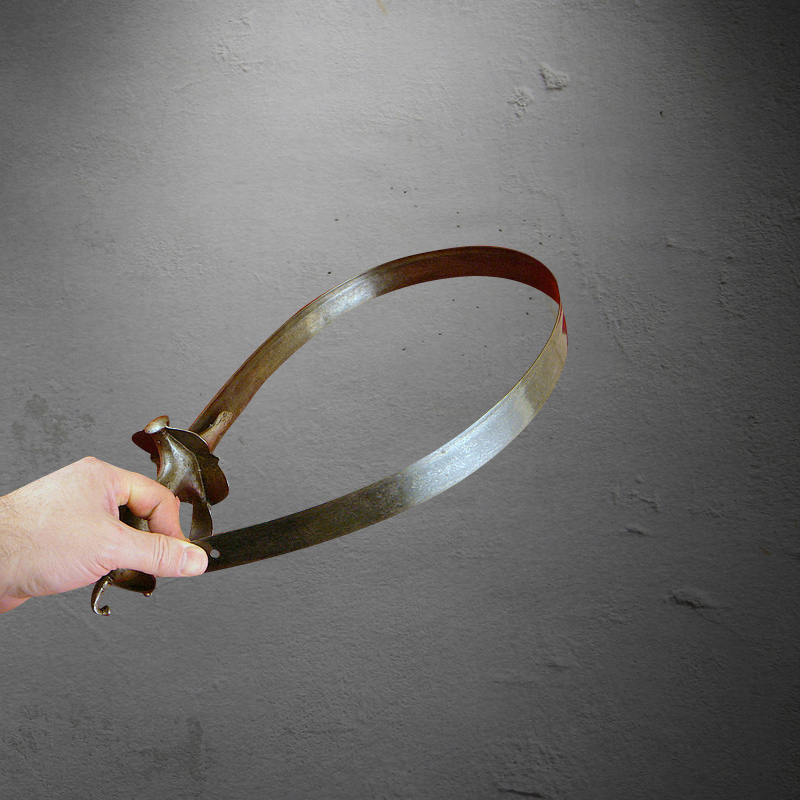 The first blade was forged in 1833. A few years later, the classic work of Pavel Anosov “On Bulat Steels” was published. The publication was translated into several languages and became the legacy of world science.

For 80 years, the Zlatoust weapons factory remained the only enterprise in the world where they could make bulat blades that had a patterned surface, incredible strength, elasticity, and blade sharpness. They could cut silk shawls on the fly and bent almost twice, without breaking.

Murchison, the director of the Royal Museum of London, who visited Zlatoust in 1841, wrote that the Zlatoust cold steel factory “is at a high degree of perfection.”

In 1915, the factory made an order for almost two hundred thousand weapons. New white weapons were adopted for army by the decrees of the kings. Emperors Alexander I, Alexander II and Nicholas II personally visited Zlatoust and got acquainted with weapons production.

For a century and a half, the Zlatoust weapons factory was the only state-owned enterprise to arm an army with cold steel weapons, first Russian, then Soviet.

During the First World War, more than 600 thousand sabers, blades and cavalry spades were made. During the World War II, our army received 583 thousand combat sabers and about 1 million army knives, nicknamed the “black knife.”

In 1945, at the Victory Parade, all its participants were armed with Zlatoust cold steel.

Since 1829, Zlatoust engraving has repeatedly got commendable feedbacks and high awards at international exhibitions:

At the first largest exhibition in Russia held in Moscow in 1882, the products of our masters were awarded a gold medal. 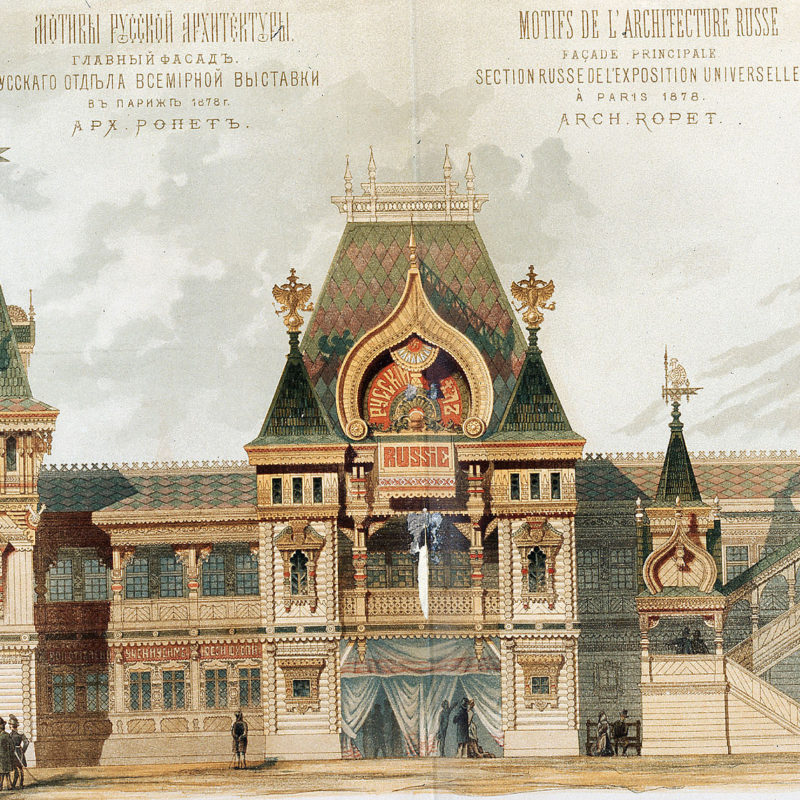 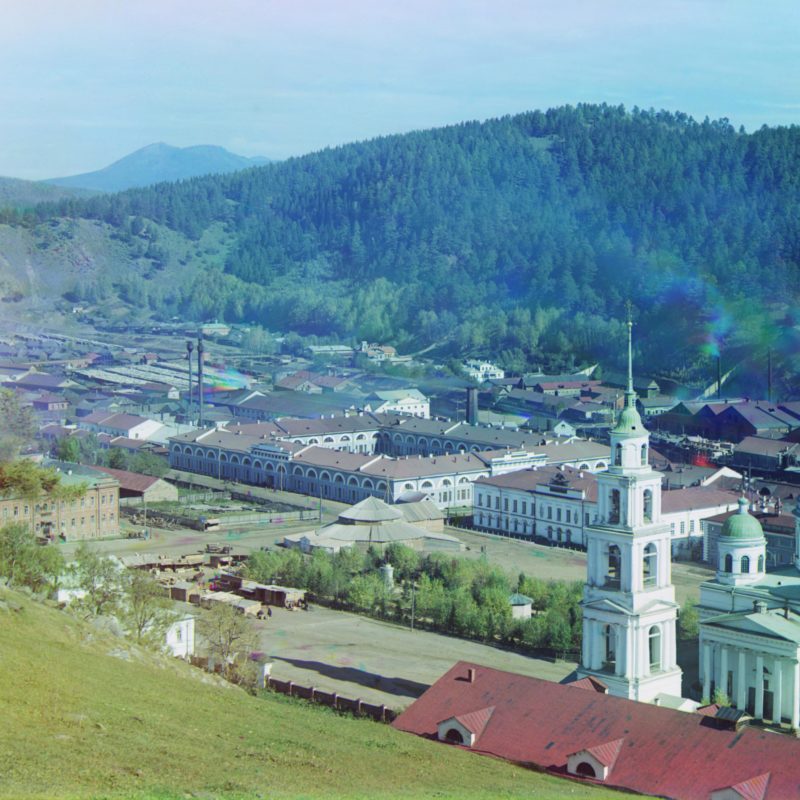 The British spy and a great connoisseur of weapons captain James Abbot stated: “It is rather doubtful whether there is at least one factory in the whole world that would withstand the competition with Zlatoust in the manufacture of weapons that combine elasticity with the convenience of honing and sharpening to the same extent.”The Zlatoust edged weapons of high artistic value adorn the collections of the most famous museums in Russia and abroad, including the State Hermitage Museum, the Armory of the Kremlin, the Museum of the Mining Institute in Saint-Petersburg, the Military History Museum in Prague, and the Museum of History in Berlin.

The Queen of England herself holds the Zlatoust engraving. Elizabeth II’s mother Elizabeth Bose-Lyon received as a gift from the Soviet delegation – the product of the Ural craftsmen – the Inflorescence dish. Mikhail Gorbachev presented a decorative panel to the forty US President Ronald Reagan. This meeting of the heads of two world powers was of great political significance — it symbolically signified the end of the Cold War.

In 1980, on the Soyuz-T-2 spaceship, piloted by astronauts Malyshev and Aksenov, the Zlatoust engraving took off into space. The works of the artist Mikhail Antipov: the panels “Doe Kinds” and the famous “Smile of Gagarin”, overcame the gravity.

Zlatoust weapons factory is an old enterprise, we do not know its history completely.Pavel Matveevich Obukhov made the first steel gun at our factory in 1860In the XIX century, the inventions of Pavel Obukhov made a splash in metallurgy. In 1862, the World Exhibition was held in London, where the gun smelted from Obukhov steel received the highest rating.

The 12-pounder gun could withstand about 4 thousand shots without damage, which was a real record for those years. For comparison, the effectiveness of tools made of English steel was almost two times lower. The foreign gun was worn out after two thousand shots.

The gun was awarded a gold medal, like other products of this plant — sabers,  cavalry swords, and cuirasses. And the creator of steel — Pavel Matveevich Obukhov — became known throughout Europe. His name began to mention on a par with the names of the “cannon king” of that time, the German industrialist Alfred Krupp and the English inventor Henry Bessemer, known for his revolutionary improvements in the field of metallurgy. 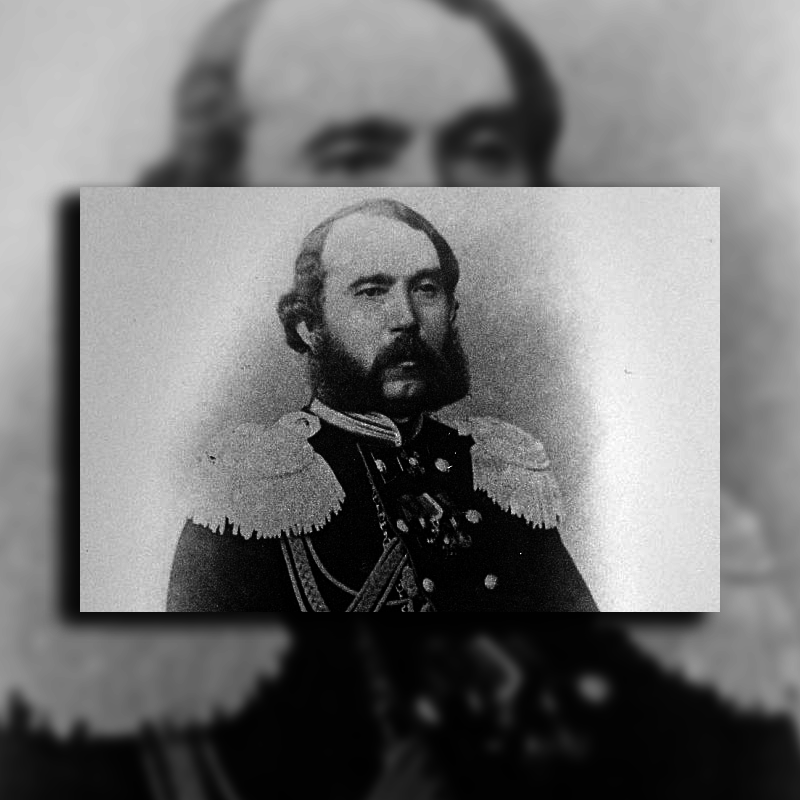 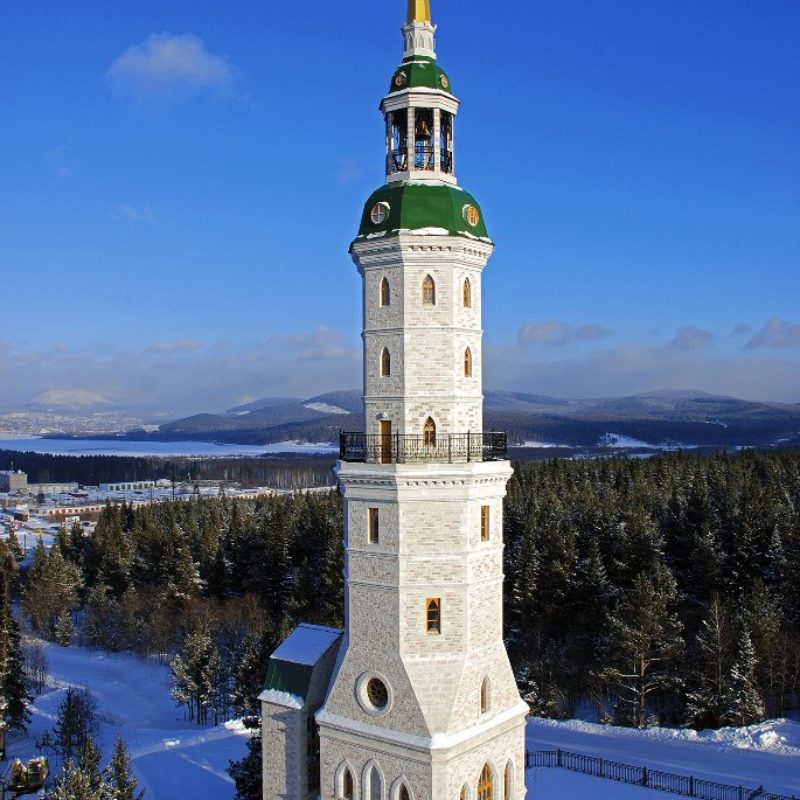 With the onset of Soviet times, the factory worked for the domestic market, the iron curtain did not allow it to fully prosper and show itself to the whole world, as before. But the traditions and craftsmanship of our weapon makers have not gone away. In Soviet times, decorated cold steel of Zlatoust was gifted to party and government officials of our country. As well as the politicians of the states friendly to the Soviet Union – Mao Zedong, Zhou Enlai (politician of China, the first head of the State Council of the PRC from the its formation in 1949 until his death in 1976), and others. Orders came from the Central Committee of the CPSU, the Presidium of the Supreme Soviet of the USSR and the Union Foreign Ministries.

Hard times came after the collapse of the Soviet Union throughout the country, and the factory was no exception. There were almost no state orders, no entrance to the foreign market, these were the 90s.

Today’s time is a time of rebirth. From the beginning of the 2000s, the best craftsmen began to establish their own small enterprises. Then, with the support of the regional Government, they united in the Guild of Weapon Makers.

Today, the city has dozens of large enterprises that combine history, modern technology, and jewelry art. The works of the Zlatoust masters have again become famous all over the world, our enterprises exhibit their products at various world exhibitions. The countries of the West, North America and the Persian countries are actively replenishing their collections with our cold steel. Within the country, the Kremlin has a special interest in our products.

In 2017, the Minister of Defense of the Russian Federation Sergey Kuzhugetovich Shoigu visited the factory. He was impressed by the work of the masters, he made an order for the production of a unique series of gratuity firearms for the Russian Ministry of Defense.

Museums of the world about Zlatoust gunsmiths

Museums of the world about Zlatoust gunsmiths

During the Second World War, the army received 583000 military sabers and about 1 million army knives

At the first victory parade in Moscow, all its participants were armed with Zlatoust cold weapons

During the Cold War, the USSR closed down from the outside world. Zlatoust masters had to leave the world arena and work only for the country needs

Onboard the Soyuz-T-2 spacecraft, the Zlatoust engraving went up into space and flew around the globe. More details

The collapse of the USSR, the Zlatoust Factory was on the verge of closure

Beginning of a new heyday

On February 15, the Chelyabinsk meteorite fell 70 kilometers from Zlatoust. The fragments of the meteorite served as materials for the exclusive knife which won first place at the international exhibition. More details

Zlatoust masters made the largest sword in the world of Damascus steel. Its length is 3170 mm and weight is 33 kg. More details

Zlatoust blacksmith is the first and the only Russian to be admitted to the largest association of blacksmiths-knifemakers of the U.S. His works are widely presented on our website