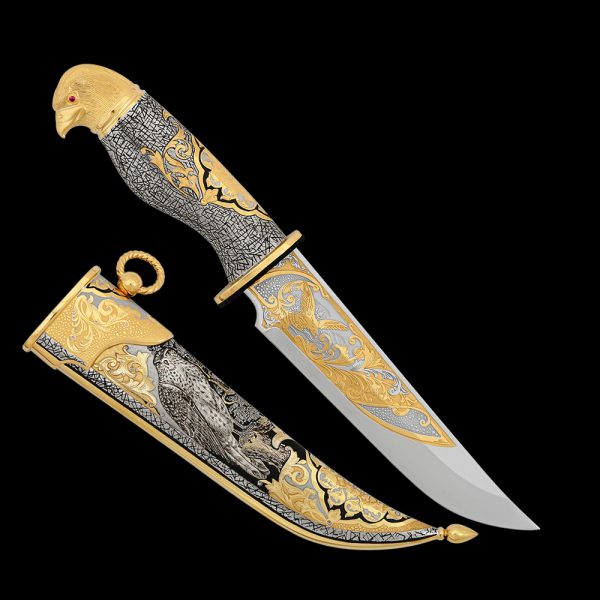 In modern state heraldry, the graceful figure of the falcon, like the emblem of the supreme power, flaunts in the coats of arms of several Arab countries: UAE, Egypt, Libya, Kuwait, Yemen, Iraq and Syria. In European coats of arms, the emblem of power in the form of a falcon sitting on the arm of a knight distinguishes the noble titled persons (dukes, counts and margraves)

Fans of knives and falconry will appreciate the design of this knife. Its ergonomic properties and a pointed blade with a slightly curved line of the butt to the point. The knife is completely made of metal. The blade is made of modern high-alloy steel. The knife surface is decorated with a golden pattern of a flying falcon. All-metal scabbard provides for superior grip and ease of carrying. The surface is decorated with floral ornaments depicting a falcon. We would also like to note the golden head of the falcon with red stones inlaid in the eyes.

The knife is made by Russian weapon makers from Zlatoust. Since 1815, Zlatoust weapon makers have been making weapons for the army and navy. A distinctive feature is the manufacture of exclusive decorated weapons. These are our weapon makers that make gift and award weapons for the first persons of the states. For example, the Presidential Regiment of the Moscow Kremlin is still armed with sabers which are more than 150 years old.