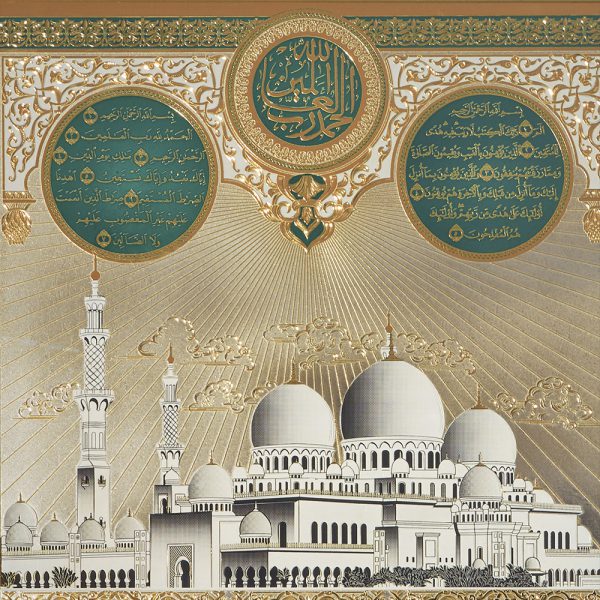 For many years now, specialists from Zlatoust have been creating elegant interior items. The original panel of religious topic is a vivid example of the talent of Zlatoust masters.

The central place on the panel is occupied by the snow-white Sheikh Zayed Mosque – one of the largest mosques in the world. It is located in Abu Dhabi, the capital of the UAE. Named after Sheikh Zayed ibn Sultan al-Nakayyan – the founder and first president of the UAE. His burial place is located next to the mosque. The big mosque, unlike the rest of the modest and laconic mosques of the city and the country, looks like a magnificent palace which can be safely called a masterpiece of architecture. Designers and architects managed to combine the style of Mamluk (Egypt), Ottoman (Turkey) and Fatimid. Domes of the mosque (82) are made of white Italian marble, the main dome of the mosque with a diameter of 32.7 meters is the largest in the world! The tops of the domes are decorated with crescents plated with gold. Amazing minarets are arranged in the four corners of the mosque, at 107 meters. The Sheikh Zayed Grand Mosque is decorated with 1,096 columns outside and 96 inside the prayer hall.

On both sides of the upper panel field there are two suras of the Holy Koran:

The item is made in the traditional technique of Zlatoust metal engraving. Around the entire perimeter, the engraving is decorated with an ornamental frame made in an oriental style. The panel is an exclusive development. The engraving is framed in a double baguette and velvet passepartout.