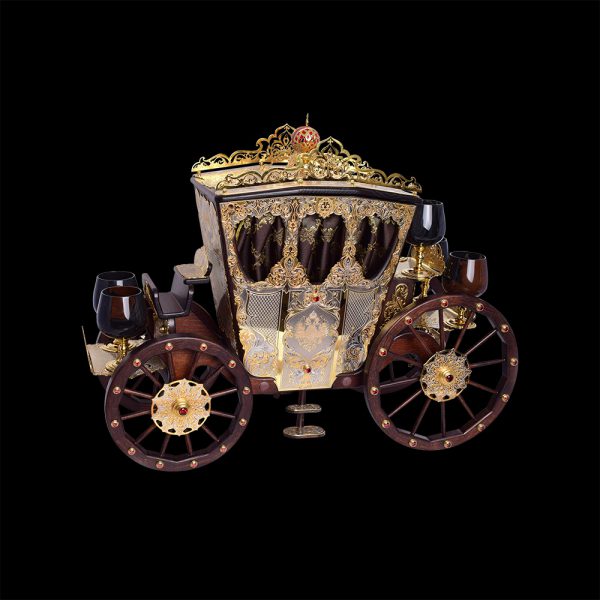 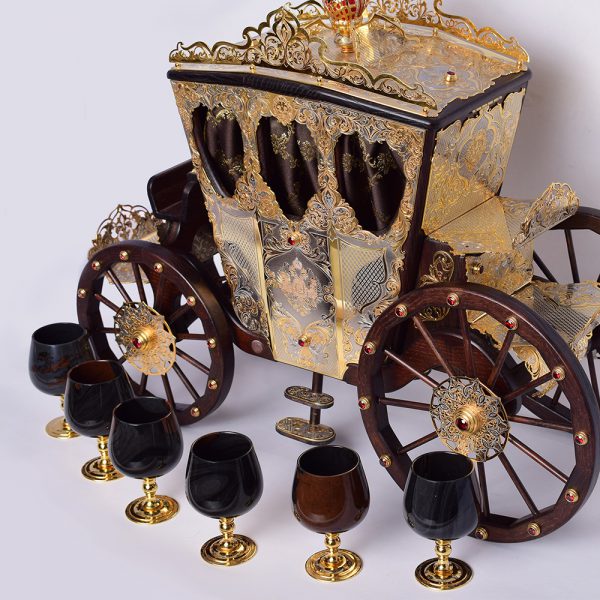 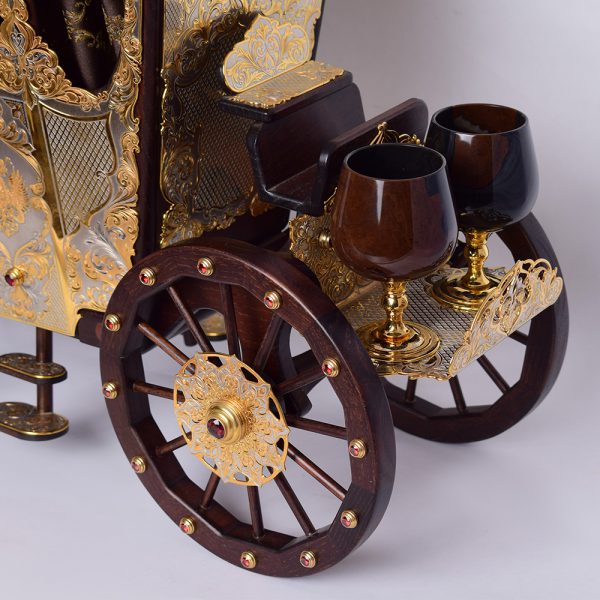 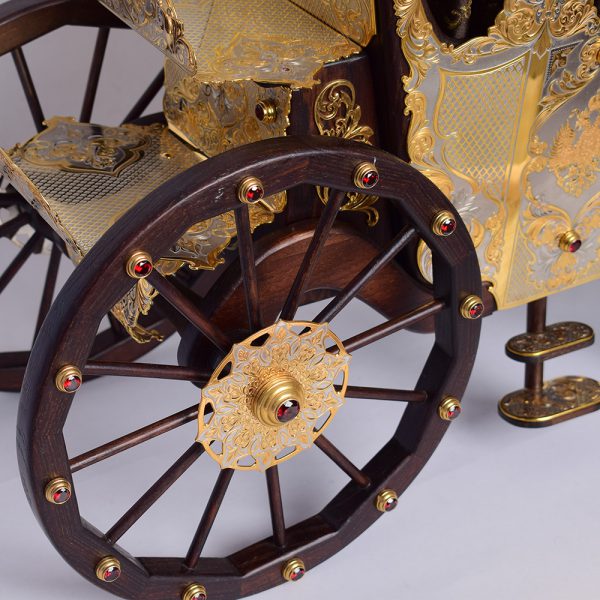 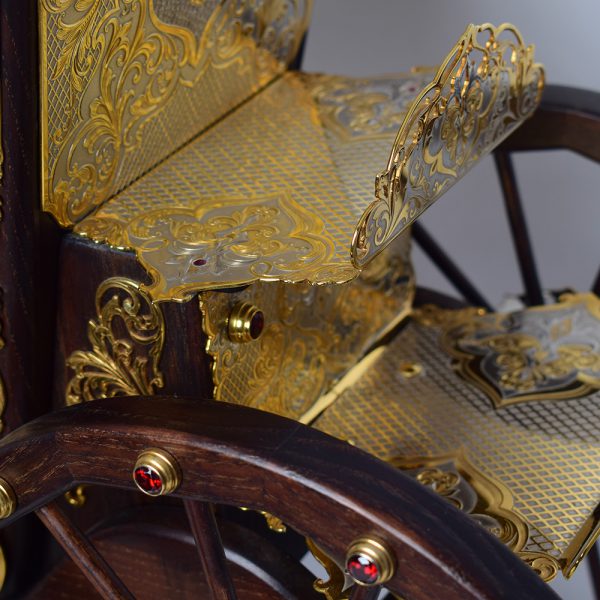 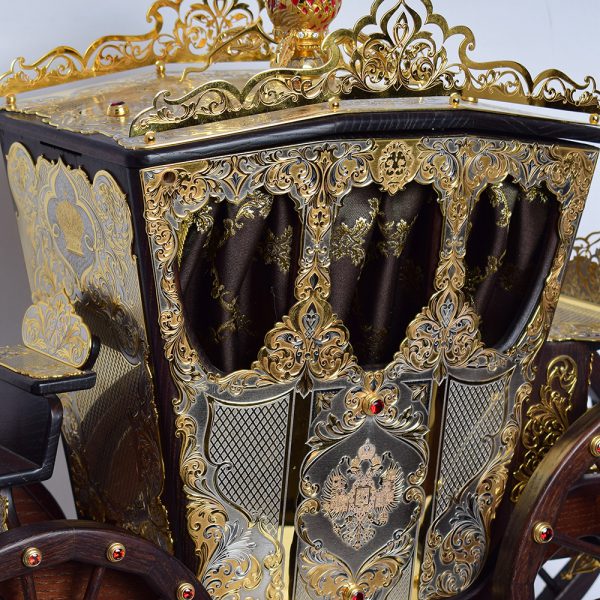 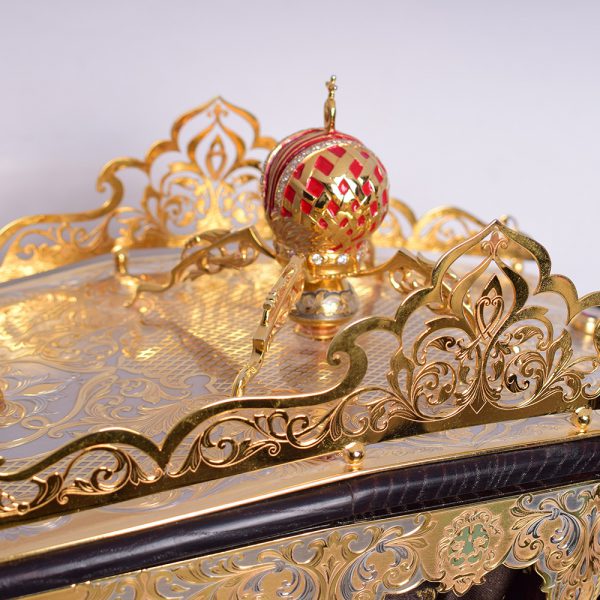 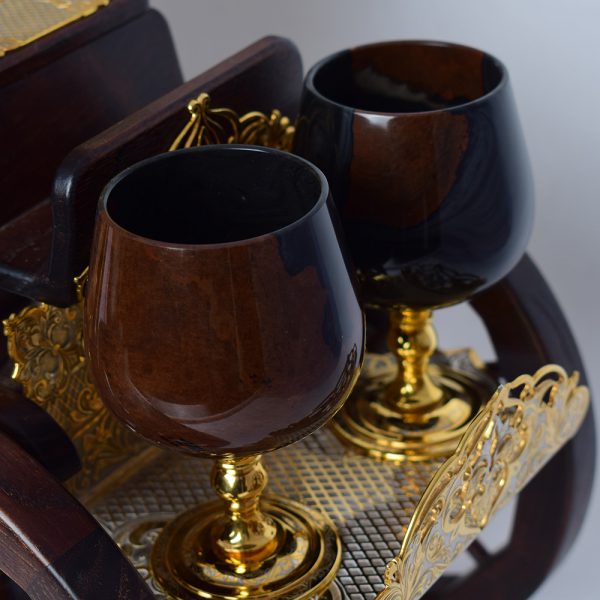 Exclusive carriage for kings! A large half-meter handmade carriage made of wood, exquisitely decorated with carved details, is eye-catching. It will become the central figure of the interior, emphasize the taste and sense of style of the owner. Truly an unusual gift for a leader, partner and friend.

The carriage fascinates with its beauty and sophisticated technique. On the carriage, there are six glasses made of natural obsidian stone. Obsidian is volcanic glass, as they call it as well. It forms as a result of rapid cooling of lava that spills onto the earth surface. In appearance, it resembles marble.

All wooden elements are made of ash wood, it has several advantages compared to other types of wood. Strong, light, moderately drying wood has long been the material for a variety of crafts. The carriage wheels can spin. The roof of the carriage leans back; the interior of the carriage serves as a casket.

The surface of all elements of the carriage is decorated with metal plates carved manually by manual cutting. Patterns in the technique of Zlatoust engraving are manually engraved on the surface of the overlays. For the second century in a row, the Zlatoust metal engraving is an original and rare kind of Russian craft. It was born at the beginning of the 19th century as a way of decorating author’s edged weapons made at the Armory founded by decree of Emperor Alexander I.

Nickel plating and gilding emphasize the beauty of the design and details. Pure 24K gold only is used for gilding. Inlaid burgundy jewelry stones complement the gilding. There is a crown on the roof of the carriage. There is a double-headed eagle – the coat of arms of the Russian Federation – on the carriage roof.

The carriage is made by Zlatoust masters, suppliers of dishes and handmade decor elements for the main residence of the President of the Russian Federation and the Moscow Kremlin. Since 1815, Zlatoust craftsmen have been making author’s decorated weapons for presidents and kings. Masters have been awarded at many international exhibitions. For example, in 1897, at the international exhibition in Stockholm, the Zlatoust Arms Factory received a gold medal. At the same exhibition, another famous Russian jeweler Karl Faberge received the title of Supplier of His Majesty the King of Sweden and Norway, as well as the imperial and royal families of Europe, Asia and Africa.