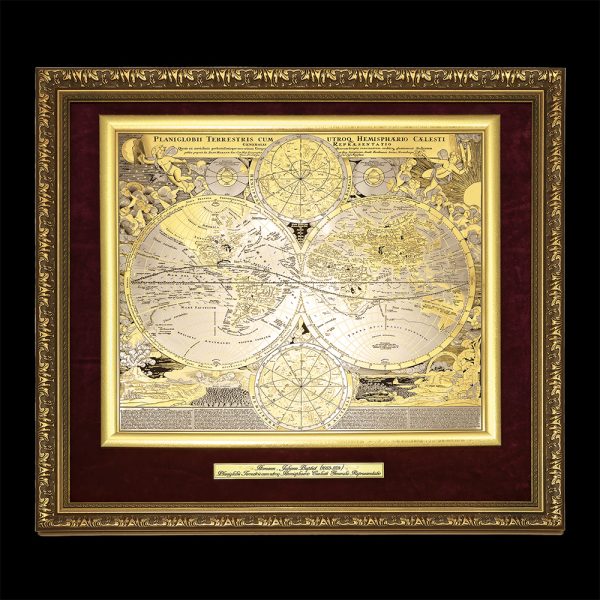 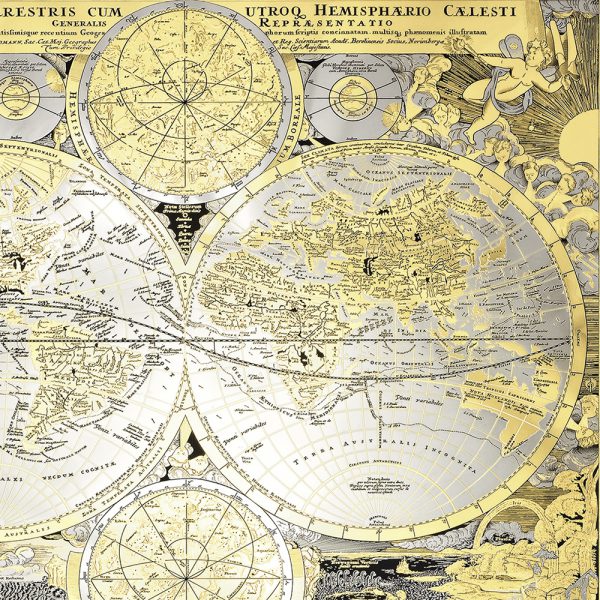 Johann Baptist Gomann (1663-1724) was a German engraver and cartographer, founder of the leading cartographic publishing house in Germany of the XVIIIth century.
Since 1715, he was elected a member of the Prussian Academy of Sciences in Berlin, appointed chief cartographer of the Holy Roman Empire at the court of Charles VI and agent of Peter the Great at the Academy of Sciences.

This world map in the form of two hemispheres was created in 1707, published only in 1729. It covers the estimated coastline of the northwestern part of America, Australia, New Zealand, as well as Africa and Southeast Asia. In general, the map is very incomplete and includes many well-known geographical inaccuracies, albeit with toponyms, as well as notes by discoverers-explorers. The routes of Tasman’s paths (1642) and the routes of Magellan are plotted on the map.

The map is richly decorated, according to the fashion of the time. In addition to the main Earth hemispheres, the map contains images of models of the celestial hemispheres – the Northern and Southern. Also, by the example of two small hemispheres, the effect of solar movement during the Winter and Summer seasons is shown, taking into account night and day cycles of atmospheric changes.

The map field is richly decorated with allegorical scenes which are a unifying element for combining fantasy and science in one work of art. In the upper part are two cherubs with torches holding a cartouche with the map title. They are metaphorical allegories of the highest divine light of enlightenment illuminating the real world for mankind. Also, in addition to the rising sun (on the right) and the C moon (on the left) against the background of the starry sky, in a cloudy mass, numerous Zephyr heads are depicted – allegories depicting an infinite number of winds in the earth and near-Earth atmosphere. All atmospheric phenomena are shown in the clouds: snowfall, thunderstorms and lightnings.

The lower part of the map is decorated with a panoramic landscape showing a picture of the eruption of Mount Etna, with details of the ongoing natural disaster, its course, consequences and related phenomena.
Below, in a band with text in Latin, observations of navigators-researchers on natural phenomena in different countries, scientific conclusions about the origin of earthquakes and eruptions, floods and storms are recorded, as well as brief notes on the effect of the moon, sun and other celestial objects on the high and low tides and rainfall on Earth. The general climate change is described as it moves relative to the equator line and the frequency the identified effects are repeated